What the media did (and didn’t) cover at Atlanta, Boulder, and the Capitol

Nearly a week after Robert Aaron Long opened fire at two Atlanta-area spas, killing eight people, including six Asian women, MSNBC’s Jonathan Capehart offered a stirring sermon to his viewers on the attack, insisting it was yet another instance of “discrimination and violence” against Asian Americans.

“We must not be cowed by the terror unleashed by white men drowning in the deep end of racism, xenophobia, and misogyny,” Capehart said. “We must not let fellow Americans of Asian descent think for one minute they’re alone.”

Such jeremiads were typical of media coverage of the Atlanta shooting, which stood out from other recent violent attacks for the amount of attention it received from the media—more than twice the number of mentions on cable news as the contemporaneous assault in a Boulder, Colo., Kings Sooper, in which a shooter killed 10. Commentators seemed even less willing to draw conclusions from the connections from the fact that the attacker who killed a Capitol police officer with his car had pledged allegiance to the Nation of Islam.

A Washington Free Beacon review of network television and newspaper coverage measured the number of times the murders were mentioned in news coverage and how the press characterized the motives of the killers. The data reveal that the Atlanta shooting held the media’s attention longer than the other two murder sprees. Their attention perhaps reflects a mélange of politically charged motives and attempts to link the Atlanta shooting to a larger story about rising anti-Asian hate, and the fact that the ethnicities and motives of the other two shooters made the media far less willing to draw systematic conclusions.

The trend is apparent on television and in print. At left-leaning cable news networks CNN and MSNBC, references to the “Boulder shooting” or shooter Ahmad Al Aliwi Alissa were frequent in the immediate aftermath of the event but declined quickly. References to the “Atlanta shooting” or shooter Robert Aaron Long, by contrast, peaked lower but were far more sustained—that is, the story remained in the news for longer. (The Capitol attack is omitted from this analysis because of the challenge of systematically differentiating it from the January 6 Capitol riot in transcripts.)

A survey of CNN and MSNBC transcripts shows that Long’s name has been mentioned at least 82 times since the attack. That’s more than twice the mentions Alissa got—he was named just 31 times—and significantly more than Capitol car attacker Noah Green, who was mentioned 57 times. Mentions of all three killers fell quickly after the attack, but Long’s name was mentioned more frequently and longer than the other two. 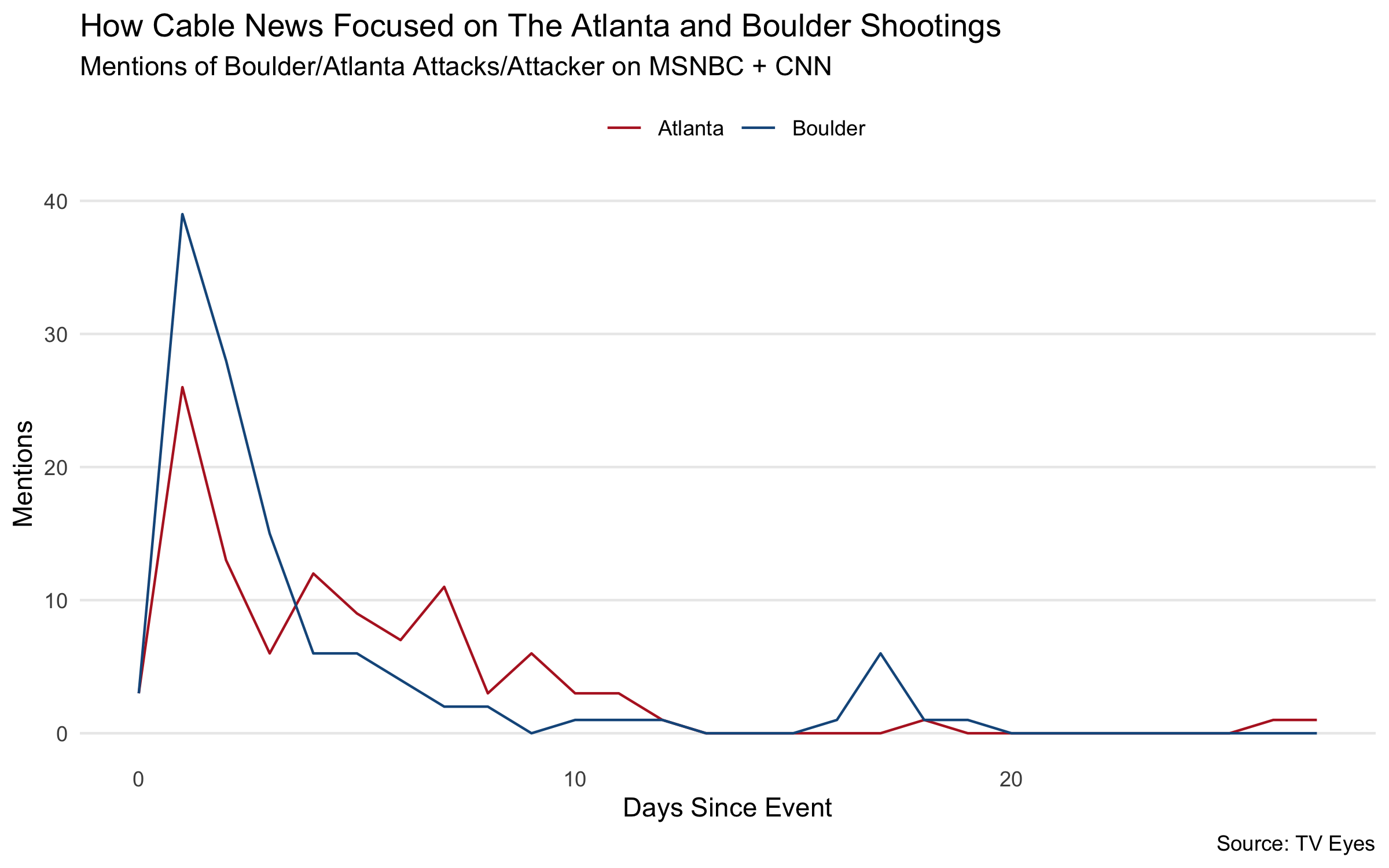 What explains this disproportionate attention to Atlanta? It’s hard not to assume that the killer’s motives—stated and alleged—had something to do with it.

Long claims that he attacked the massage parlors because he saw them as temptation, an acting-out of his “sex addiction.” But many in the media were quick to connect his shooting to a string of hate crimes targeting Asian Americans, as well as to other much-hated “-isms.”

A survey of coverage of the shootings in three major print publications, the New York Times, Washington Post, and Los Angeles Times, provides more insight. The Free Beacon identified some 85 articles covering the three shootings across those outlets. The Atlanta shooting accounted for 51 of the pieces, the Boulder shooting 22, and the Capitol attack 12. Those numbers may not represent total coverage, however, as articles may be missing. 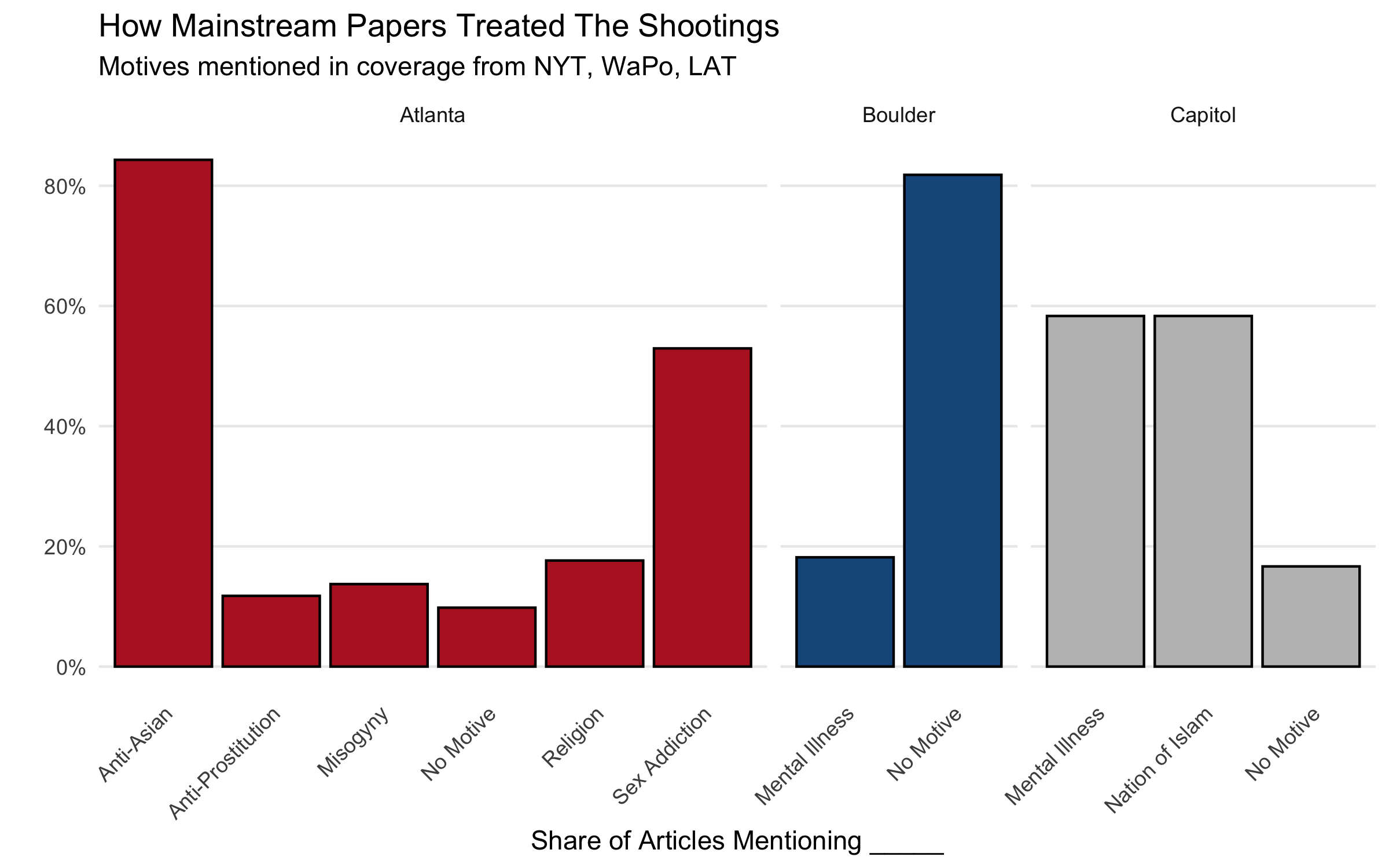 The Atlanta shooting was immediately incorporated into a broader narrative about a spike in anti-Asian hate crimes, and the motives of the shooter were of greater interest to the media than those of the other two assailants.

Although evidence of anti-Asian bias in Atlanta is mostly circumstantial, more than 80 percent of articles surveyed mentioned it. That’s more than the killer’s own professed motive, “sex addiction,” of which many writers were plainly skeptical. Some articles used the shooting as a jumping-off point to discuss historical anti-Asian violence, or even just Asian inequality. Other popular themes included misogyny, bias against prostitutes, and Long’s religious views, with some blaming “purity culture” for the shootings.

By contrast, news coverage rarely identified a motive for the Boulder shooting with the exception of possible mental illness—a fact that reflects the ongoing uncertainty of the police about the impetus for the attack. Although Alissa’s Islamic faith was mentioned, albeit infrequently, it was never considered a motive for the attack. Coverage instead debated whether Alissa should be categorized as white.

Much as the Atlanta shooting was used as a peg to discuss bias against Asians, article after article used the Boulder shooting as a jumping-off point to discuss pushes for more stringent gun control. Perhaps because the motive was murky or less salient to preferred narratives, it took a back seat to the method by which the attack was carried out—a topic mostly absent from reviewed coverage of the Atlanta shooting.

The Capitol attack, which offered no opportunities to talk about bigotry or gun control, received far less attention. Coverage did allude to Green’s mental illness and his connections to the Nation of Islam, but did not suggest the group’s toxic ideology caused the murder. As the Times put it in a characteristic description, “Mr. Green’s adherence is likely to increase scrutiny on the group, as investigators try to determine whether his beliefs played a role on Friday’s attack.” Unlike in the Atlanta shooting, the Gray Lady ran no op-eds suggesting that scrutiny be increased.

The treatment of these facially similar stories largely reflects the lessons the media would like viewers and readers to draw. That the Atlanta shooting garnered far more attention is no accident, as it offered a powerful example of many favored talking points. Green’s attack, by contrast, highlighted a group the left-leaning media have long preferred their critics would forget about. Is it any wonder it vanished so quickly?

BERLIN — Nearly a year after President Donald Trump ordered thousands of troops to leave Germany, capping a series of setbacks for U.S. relations with…

Mattie Parker Is Next Fort Worth Mayor in Win for GOP