Voters left unable to register for convention due to ‘scheduled maintenance’

Virginia’s Department of Elections shut down its voter information portal for “scheduled maintenance” during the final day Republican voters in the commonwealth’s largest county were able to register for the party’s upcoming convention.

The website was taken down on April 9, a day before the April 10 deadline for Republicans in Fairfax County to register to participate in next month’s nominating convention. When voters attempted to locate their required voter number on the state government’s website, an error page read, “We are in the process of performing updates to the Citizen Portal. Due to these changes, the Citizen Portal is temporarily unavailable.”

Virginia Republicans are nominating their candidates for governor, lieutenant governor, and attorney general at convention sites across the commonwealth on May 8, rather than using the state’s primary system that Democrats utilize. Mike Beer, a longtime Fairfax County voter, missed the deadline to register for the nominating convention due to the website’s outage. “Virginia voters don’t carry their voter ID numbers around on them in case the state’s computer system is on the blink,” Beer told the Washington Free Beacon. “It’s all too cute but the end result is that I missed the convention deadline because I couldn’t furnish the state ID number.”

A spokesman for the Department of Elections told the Free Beacon that the scheduled maintenance from April 9 to April 12 was made months ago “to ensure maintenance was completed prior to the start of absentee voting for the state run primary on April 23.”

Peter Doran, a Republican businessman running for governor, told the Free Beacon that the failure is a result of “one-party rule” by Democrats, who control both the legislature and governor’s mansion.

“Democrats have one-party rule in Virginia,” Doran said. “They talk a big game about expanding voting access but apparently that does not apply to people who do not vote for them.”

Republican candidates working to get voters registered adapted to the website’s outage. Glenn Youngkin, former CEO of the Carlyle Group and current gubernatorial candidate, set up a hotline for voters to call so his campaign could use resources to help them find their voter numbers. 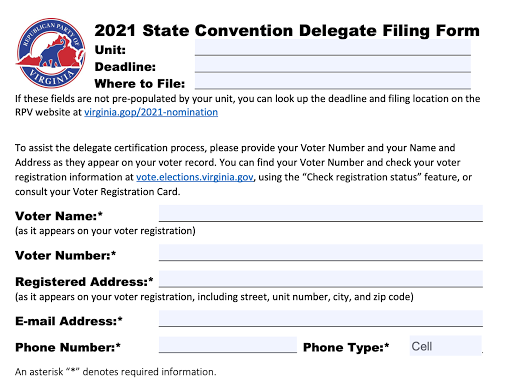 Youngkin spokesman Matt Wolking tied the website’s outage to broader “incompetence” from Gov. Ralph Northam (D.). “Virginians have had their unemployment aid languish, their vaccine rollout botched, their parole board corrupted, their jobs crushed, and their economy hurt by the career politicians in Democrat-controlled Richmond,” Wolking said. “Now they shut down the state’s website hours before the largest county’s deadline to participate in the May 8 Republican convention.”

While the website was scheduled to remain offline through April 12, it was back online sometime during the afternoon of April 10, after Fairfax County’s noon deadline had passed. It is unclear how many voters were unable to register for the convention because of the outage.

“Who expects to have the Virginia Election website down for three days in the middle of the convention process and deadlines?” Beer asked.

For Warriors star Stephen Curry, NBA Christmas Day games have been nothing but lumps of coal

What is the best way to stop Stephen Curry? Constantly send double-teams his way? Defend him with a physically imposing forward instead of a guard?…

What TV channel is USA vs. Russia on today? Schedule, time for 2021 World Juniors game