In a City Journal piece over the summer, I cast some doubt on the idea that 2020’s massive homicide spike — a 30 percent increase — had been driven by strong gun sales. America has so many guns that even a really strong year for sales doesn’t boost the supply that much, and most crime guns tend to be fairly old anyway.

Most interestingly, places with the biggest gun-sales spikes didn’t also have the biggest shooting spikes, according to a then-new study in Injury Prevention. I further noted, however, some NYPD numbers suggesting that while guns purchased less than a year ago accounted for 10 percent of crime-gun traces in 2019, they were 18 percent in 2020. 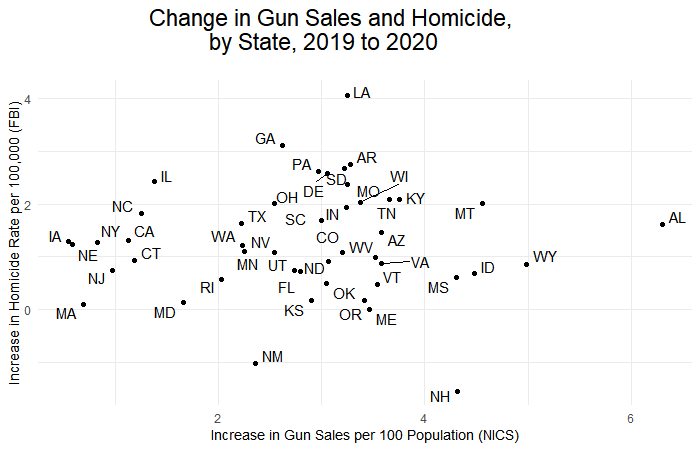 The new trace data, however, are less kind to the latest additions to America’s gun stock. In 2019, about 20 percent of traced guns had been purchased less than a year prior; in 2020, this rose to about 30 percent. (The Trace has some more ways of cutting these numbers here, as does my colleague Charles Fain Lehman here.)

Both these data sets have their limitations. The background-check data don’t include certain transfers, such as private gun sales completed without background checks, and obviously they don’t account for the fact that a gun can be purchased in one state and trafficked to a different one. Meanwhile, the gun-trace data comprise a mishmash of different situations in which police thought it useful to trace guns, from assaults and murders to suicides and “found” guns. Ideally, we’d want to look at the “time to crime” of guns used in shootings specifically, but those data are not publicly available, so we’re stuck looking at a broader yet non-random sample of guns that police recovered.

If I had to take a stab at reconciling these two patterns, however, my guess would be this: There were two separate phenomena unfolding in 2020. One was a massive surge in fully legal gun sales owing to the pandemic and the riots; this had little to do with driving crime. The other, though, was the increase in violence itself — which likely led to a surge of criminals’ seeking guns in various ways, including by trafficking new guns bought via “straw purchasers” and so on, and then getting caught carrying them or using them in crimes. This would be a small share of all gun sales and not enough to affect geographic correlations, especially since trafficked guns often cross state lines anyhow, but an undeniable flow of guns to criminals all the same. It’s an interesting question how that scenario might fit into our partisan mudslinging about guns.

There are almost too many U.S. athletes at the 2021 Tokyo Olympics to keep track of. Almost. NBCUniversal will provide an unprecedented 7,000-plus hours of…

Brothers and Others | National Review