Allow me to add a few words to our celebration of 30 years on the Supreme Court for Clarence Thomas. I had the honor and pleasure of meeting Justice Thomas in the spring of 1992, when he was freshly on the Court. Thirteen of us from Holy Cross College were in D.C. for our “semester in Washington” program (I was an intern for my then-congressman, Ben Gilman), and wrote to Justice Thomas as a fellow Crusader. He graciously met with us for 45 minutes, was at turns funny and still a bit raw at his mistreatment by the Senate the previous fall, and posed for individual pictures, in which you can marvel at my early-1990s eyeglasses: 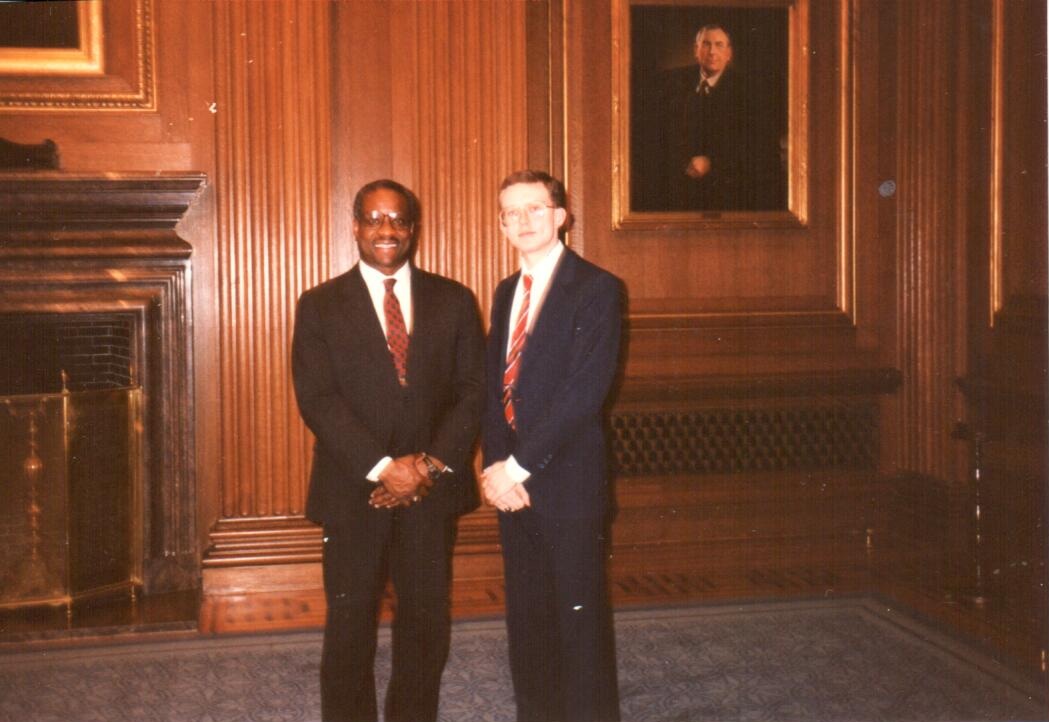 I have had occasion in the years since to write a great many words about Justice Thomas and his jurisprudence, which may finally be coming into the peak of its influence on the Court this term. Two of those articles have been particularly comprehensive, and summarize what I could hope to contribute to this commemoration. At the end of the tempestuous 2014–15 term of the Court, best recalled for the Obergefell same-sex marriage decision, I wrote a deep-dive cover story in the Weekly Standard reviewing at length Thomas’s major opinions that term and the philosophy they embodied:

Like a medieval monk preserving Western culture through the Dark Ages, Thomas soldiered doggedly on, carrying the largest writing workload on the Court, pressing his point in cases small and large, sometimes at odds with his conservative colleagues, often alone. Perhaps history will never return to the path he is marking, but no one can say we weren’t warned . . .

Clarence Thomas is an affable man, if one who does not forget his scars, and by all accounts he gets on well enough with his colleagues. But given that few of them other than Scalia bother responding to his lone opinions, one wonders if some of them look at him a little funny—“that guy who keeps going on about the Constitution.” He is known to prefer the company of almost anyone to the company of his fellow judges and lawyers; he meets more often than any other justice with groups of visitors to the Court and travels the country in his RV during the Court’s recesses. But that distance makes him uniquely suited among the justices to look at this country not from the perspective of a member of the judicial high priesthood, but as a citizen ruled by it . . .

Thomas’s opinions this term form a coherent whole, one that places no trust in institutions—in the wisdom of judges, the expertise of bureaucrats, or the evenhandedness of either—but depends instead on clear, written rules and structural checks and balances. And his philosophy, while grounded in the same principles as our Constitution itself, should not surprise us. Thomas is not so far removed from his upbringing in segregated Georgia that he cannot remember what it was like to live in a place and time in which the government was staffed and run by people who had no intention of treating you fairly.

Two strategies are available to a citizen confronted by such a government. One is to keep for himself as large a space as possible free of the government, in which to exercise true liberty. The other is to insist on the punctilious observance of the letter of the law. The whims of administrative agencies and the discretion of judges to fashion new rights and rules according to their own policy preferences threaten both of these strategies, to the detriment of whomever the people in power regard as beneath their concern. It is perhaps a supreme irony, but a fitting one, that the man most concerned with keeping alight the flame of these old concepts of liberty and dignity is the justice of the Supreme Court who grew up under a government that wished to accord him neither liberty nor dignity.

In 2019, for National Review, I reviewed Myron Magnet’s book Clarence Thomas and the Lost Constitution:

Picture Clarence Thomas as a legal Indiana Jones, dodging slings and arrows to rescue a valuable and powerful relic from the wrong hands after it fell into undeserved obscurity. That’s the thesis of Myron Magnet’s new book. . . . [The book is] a potboiler, briskly surveying how our founding charter went missing, what impelled Justice Thomas to go looking for it, and what he unearthed. At the end of the journey, the reader will be forgiven for suspecting that the original Constitution will nonetheless be consigned to a dusty corner of a government archive while the capital’s top men insist they can do better without it . . .

Will Thomas’s rediscovery of the original Constitution be in vain? His opinions often attract little support or even response from his fellow justices. He writes for posterity, and 20 percent of President Trump’s appellate-court nominees have been former Thomas clerks. Living constitutionalists, in Thomas’s words, overturn precedents until “they get what they want, and then they start yelling ‘stare decisis,’ as though that is supposed to stop you.” By contrast, even conservative judges who hold the line against new inventions often blanch at rolling back old precedents, however rootless. But the original, written and amended Constitution doesn’t belong in a museum.

If you valued reading this article, please consider joining our fight by donating to our Fall Webathon. Your contribution makes it possible for us to continue our mission of speaking truth and defending conservative principles.

If you valued reading this article, please consider joining our fight by donating to our Fall Webathon.

Over the years, I’ve had my run-ins with discrimination against Catholics from other Christians (who have misconceptions about what we believe about Mary, the saints,…